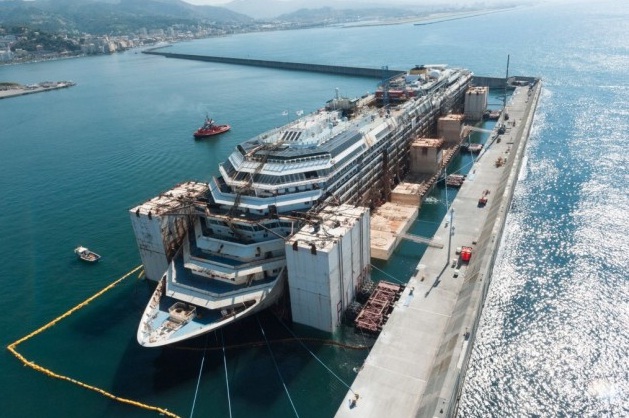 The dismantling project is being carried out by the “Ship Recycling Consortium”, which is made up of the Italian company Saipem (51%) and San Giorgia del Porto (49%). The project is expected to last for a total of about 22 months and will involve between 100 and 250 personnel working at any given time. As was the case with salvage, safeguarding the environment and all personnel involved will be of paramount importance throughout the entire project.

With the wreck now in Genoa, the Ship Recycling Consortium has already drafted and presented a “Ship Recycling Plan” detailing the four phases of the dismantling project, which includes a detailed Waste Management Plan illustrating the procedures for the disposal/recycling/reuse of all the materials obtained.
According to the Consortium, the dismantling work is being carried out with the aim of recycling approximately 80% of the discarded materials, including about 50,000 tonnes of steel and other metals which are to be obtained from the wreck.

Detailed below are the 4 Phases of the Costa Concordia Dismantling Project:

Phase 1 began with the mooring of the Costa Concordia at the “Seawall” pier in the Port of Prà Voltri on July 27, 2014. After being handed over by the salvage consortium Titan Micoperi, the Ship Recycling team got to work performing important operations related to yard safety and preparations for the initial ship breaking and stripping of the interiors. Specifically, these initial tasks included:
• Installation of the shipboard fire-fighting system
• Completion of the lighting system
• Installation of the necessary wiring and electrical installations
• Installation of elevators for transportation of materials
• Safety measures – e.g. repair of the gunwale/bulwarks, closure of certain shafts and spaces, protective measures in stairways, installation of gangways affording access to the ship
• Installation of one crane on the lido deck (about 60 meters in height) and another one forward for lifting materials
• Creation of openings required to remove materials and load them on barges for transportation to a dedicated area of the port
• Winterization of mooring arrangements (in case of adverse weather conditions during the winter season).
Behind the scenes, all the administrative procedures have been carried out in order to obtain the permits and authorizations required, the last of which was duly issued on October 9, 2014, the Consortium said.
The Porto di Prà Voltri location consists of two separate worksites: the “Seawall”, chosen for initial mooring of the wreck, and the pier at the far end of the “Banchina di Voltri” quay, where facilities have been set up for logistics operations and waste management.
The initial ship breaking involves the stripping and removal of the furnishings and fittings of the decks above water, beginning with the highest decks and working down. One of the primary goal’s of this first phase is to reduce the draft of the wreck, which will allow for the ship to be moved to the “Molo Ex Superbacino” dock where phases two and three of the project will take place.
The Consortium estimates that about 8,000 to 10,000 tonnes of material will need to be removed prior to the transfer. Phase 1 is expected to be completed in the first few months of 2015 (possibly March) and involves up to 200 people.

Phase 2: Transfer to the “Molo Ex Superbacino” Dock and Dismantling of Decks

Once the Costa Concordia reaches the required draft, the wreck will be moved from the “Seawall” pier to the “Molo Ex Superbacino” dock. Here, personnel will work to dismantle the structures of decks 14 to 2, including the stripping of interior furnishings and fittings on the decks.
The Consortium notes that during this phase, the deck structures will be removed in such a way as not to adversely impact the stability or longitudinal strength of the hull.
Phase 3: Preparation for Transfer to Dry Dock
The main objective of Phase 3 will be to create buoyancy by making several compartments of the ship watertight and possibly installing airbags. By doing so, the Consortium will be able to remove the 30 sponsons before towing the wreck to dry dock, where final dismantling will take place.

Final dismantling operations are to take place in a segregated area of what is known as Dry Dock no. 4, where the wreck will be towed at the end of Phase 3. Once there, Phase 4 will involve the complete disassembly of the wreck, including the removal of all interior fittings, the clean-up of additional areas, and final demolition of the remaining structures.
Phase 4 will conclude with the appropriate handling, disposal and recycling of the discarded materials.