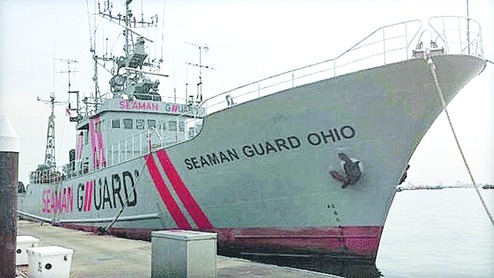 An Indian court on Monday sentenced crew members of a US-operated ship, including three Ukrainians, 14 Estonians and six British citizens, for carrying weapons meant to defend against pirates while in Indian waters.
A judge in the southern state of Tamil Nadu sentence the foreigners and 10 Indian crew members to five years in prison, in a case that is likely to spark diplomatic tension and debate over armed guards on ships traveling through pirate infested waters. The judge also fined each crew member 41 euros ($45).

India's coast guard arrested the crew from the Seaman Guard Ohio in 2013 off the coast of Tamil Nadu after they failed to present proper papers to carry weapons.
The ship's owner, the US maritime security firm AdvanFort, said all weapons aboard were legally purchased and registered.
The crew spent nine months in prison after the arrest before being released on bail under the condition that they did not leave India.
Crew members' lawyer said his clients would again seek bail and challenge the verdict.
The southern tip of India is a major cargo shipping route and ships often carry armed guards to protect against pirates, a controversial and largely unregulated practice.
A diplomatic row erupted between India and Italy after 2012 incident in which two Italians marines killed two Indian fishermen after mistaking them for pirates.