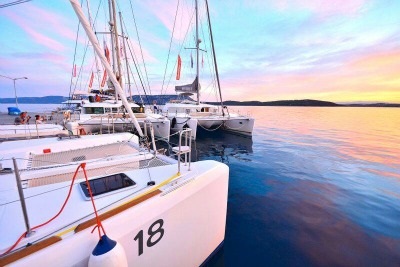 CATAMARANS CUP, this unique in its kind international sailing regatta featuring exclusively charter catamarans, was once more organized in Greece with great success.

This year’sincreased participation exceeded every expectation as the event attracted a fleet of 31 sailing catamarans crewed by friends and families, hosting 297 sailors from 18 countries including U.S.A., UK, Spain, Russia, Germany, Switzerland, Bulgaria, Holland, Romania, Serbia, Croatia, Ukraine, Italy, France, Cyprus and Estonia. With many of the same elements that made the regatta so popular in the first place, the three competing classes of catamarans chartered by the participants sailed 4 daily races on a racing course starting in Athens and finishing in Nafplion. Participants enjoyed 4 days of sail racing, 3 thematic competitions and lots of fun on a sail race amidst a 6-day sailing cruise in the Greek islands spanning over a week full of prize events, parties and celebrations, delivering good competitive sailing and family fun to a wide range of catamarans and sailors of all levels of competence.
The 1st day of race involved sailing from Athens to Poros Island under favorable leeward winds of 15 to 25 knots. Following the COOK OFF! competition that took place at the historical Syggros establishment in Poros, the Deputy Mayor of Poros Municipality delivered awards to 1st day winners.
The second day of racing proved to be more demanding in terms of crew technical and tactical skills because the prevailing winds of 8 to 14 knots continuously shifted directions as the yachts raced from Poros to Ermioni. A big welcome had been organized by the Municipality of Ermioni - a true feast featuring traditional dancing as local delicacies were being treated to all participants as the awards were conferred by Deputy Mayor Mr. I. Dimarakis, Community Council President Mr. C. Daglis, and Council Member Mr. G. Tsegkis. Northern, leeward winds of no more than 8 knots blew during the third day as crews raced to Leonidio where SHOW OFF! competition took place and representatives of the Port Authority awarded winners after completion of this 3d race.
Fourth and last racing day involved sailing from Leonidio to Nafplion; yachts sailed upwind, wind speeds ranging from 6 to 16 knots. Harbor Master of Nafplion Mr. S. Marinos delivered the awards upon completion of this last leg of race whilst the warm hospitality received at Nauplio was complimented by Mr. T. Mallios and Mr. I. Ipsilantis who arranged that local products and delicacies are offered to all participants. Participants spent the two following days on a free sail to Athens where on the final night they literally had a blast partying during the farewell ceremony Party! Overall winners received the Cup and winners of the SHOOT OFF! photography competition were announced on a feast that lasted till the late hours! Skipper PETR KOCHNEV from Russia who won the 1st place with his crew in 2014 seems to be seeking for a worthy opponent as he remains 1st by winning the race once more, on a different chartered yacht this time! Οrganized by Istion Yachting under the auspices of the Greek Ministry of Tourism (GNTO) the event has been supported by many industry partners through a program that is now in its 6th year. Setting sail from this year’s success towards the next one, preparations for the upcoming 7th CATAMARANS CUP in 2016 will soon begin!