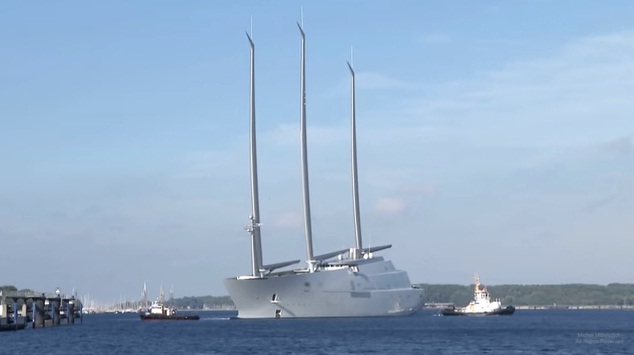 The world’s sail-assisted motor yacht hit the water for the first time recently as it set out for a series of sea trials off the coast of Germany, giving eager yacht enthusiasts their first good look at the nearly completed vessel.

The vessel, named Sailing Yacht A, is being built for Russian billionaire Andrey Melnichenko, owner of the unmistakable Motor Yacht A.

According to Boat International, the 12,700 gross ton Sailing Yacht A has a length overall of 142.81 meters, with a molded beam of 24.88 meters. In addition to its massive sails, propulsion comes from a hybrid diesel-electric propulsion package featuring two MTU 3,600 kW diesel engines and 4,300 kW electric motors driving controllable pitch propellers.

The yacht is designed by the Dutch design firm Dykstra Naval Architects and is being built by German Naval Yards in Kiel, Germany. The yacht’s 3 carbon composite masts, said to be largest and most technologically advanced free-standing masts in the world, were constructed by Magma Structures in the UK.

The yacht is expected to be delivered in 2016.