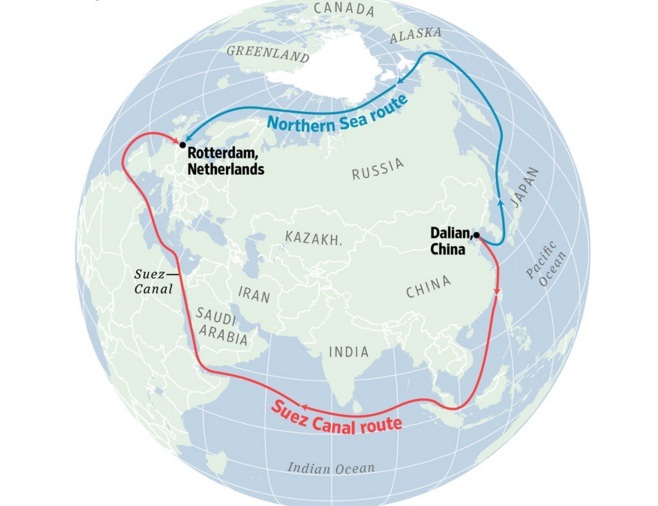 “The group is actively studying the feasibility of operating regular services on the northern route,” a spokesman for the company, known as Cosco, told The Wall Street Journal. “We are considering to buy secondhand ships or build new ships for the potential routine services.”

Cosco made its plans public after two successful test runs of its Yong Sheng general cargo ship, one back in 2013 and the second this month. The vessel is the only one in the Cosco fleet equipped with an icebreaking hull.

Europe is China’s biggest trading partner, and Chinese state media have described the 3,400-mile Northern Sea Route as the “most economical solution” for China-Europe shipping. Moscow actively advertises the Russian-controlled NSR as an alternative to the Suez route, and Prime Minister Dmitry Medvedev has said he expects more than 10 million tons of cargo to be shipped annually over the next decade. So far, the NSR’s record volume was in 2013, when 1.4 million tons of cargo went through on a total of 71 ships.

Cosco officials said they would probably lay out their plans for an NSR fleet by the end of the year.

The crossings dropped to around 50 in 2014 and this year. Bjorn Gummarson, managing director of the Northern Sea Route Information Office, said that while weather conditions were relatively mild, Russian icebreakers that open up routes through the ice for safe navigation have been mostly chartered by Russian gas major OAO Novatek to help with the construction of a Siberian port where Novatek is developing a giant natural-gas project along with France’s Total SA and China National Offshore Oil Corp.

“The Cosco plan shows the potential of the NSR, but a lot more needs to be done to turn it into a major sea route,” Mr. Gummarson said. “The ports along the route need to be developed to handle more cargo, along with plans to tackle oil spills and search-and-rescue operations. As temperatures get warmer, navigation becomes easier, but ice-class ships are expensive to build and in parts of the passage the waters are quite shallow, allowing only medium-sized vessels to pass through.”

Shipowners agree it will take years to determine whether the route will become commercially viable. “The NSR will never seriously rival the Suez but, if temperatures continue to rise, it will certainly become much busier,” said a Greek owner who charters container vessels to Chinese companies trading with Europe.

Analysts estimate that in 2021 about 15 million metric tons of cargo will be transported using the Arctic route. That would remain a fraction of the 900 million tons now carried annually on the Suez Canal.

The NSR, at around 8,100 nautical miles, is about 2,400 nautical miles shorter than the Suez Canal route for ships traveling from Shanghai to Rotterdam, Netherlands, according to the NSR Information Office.

“The Arctic route can cut 12 to 15 days from traditional routes,” Mr. Gummarson said. “The travel window opens in July and closes in November, with September and October where there is very little ice across the route.”

Current Arctic ice concentration is around half of what it was in 1979, according to the U.S. National Snow and Ice Data Center. “What we have seen this summer reinforces our conclusions that Arctic sea-ice extent is in a long-term decline and that we are headed for a seasonally ice-free ocean,” said Mark Serreze, director of the center.

The benchmark Asia-to-Europe shipping route accounts for 15% of the global total. When sailing the NSR, ships from China sail across the Bering Strait, through the East Siberian Sea and the Vilkitsky Strait and then on to European ports.

China has made no secret of its interest in the Arctic passage. In 2013, Beijing obtained “permanent observer” status at the Arctic Council, which consists of eight countries with territory in the region.