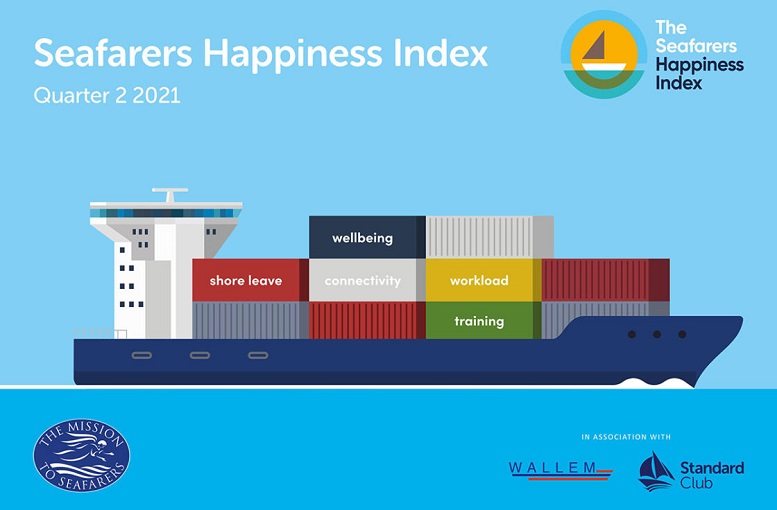 Industry and governments urged to boost vaccination drive as seafarer happiness drops to an all time low since the beginning of covid-19. The latest Seafarers Happiness Index from The Mission to Seafarers paints a harrowing picture, with the lack of shore leave causing distress to many.

The Mission to Seafarers has published the latest Seafarers Happiness Index report for the second quarter of 2021, painting a grim picture of seafarer welfare with overall happiness dropping to an all-time low since the beginning of the COVID-19 pandemic.

The report, which is carried out with support from Wallem Group and the Standard Club, revealed that seafarers were becoming frustrated of being constantly in the same environment due to the lack of shore leave.

This quarter’s report has reflected the need for wider vaccination programmes via three core themes; the ban of shore leave in ports, the continued delay in keyworker status and, minimal movement for crew.

The absence of freedom of movement and continued extended contracts has dashed all the positive thoughts seafarers once had as boredom and irritation about many aspects of life at sea increase. One seafarer who responded to the survey mentioned having experienced one and a half years without setting foot on land, highlighting the dramatic need for the industry to do more.

Furthermore, the ban of shore leave and being constantly in a ship for a prolonged period has meant that physical wellbeing is being neglected. Seafarers who had been motivated to stay active during the earlier stages of their trips expressed feelings of lethargy, apathy and physical exhaustion months into their assignments.

The maritime industry has started putting its vaccination plans into action with leading flag states and big seafaring nations including Cyprus, Singapore, Philippines, Germany and the USA leading the way at their respective seafarer centres. However, with happiness levels down to 5.99 out of 10, it is time for the industry to ramp up international progress.

While momentum for designating seafarers as key workers was once the topic of conversation, seafarers feel like this has been put on the backburner and they’re no longer ‘flavour of the month’. As a result, concerns over wage rises, key worker status and the fact that seafarers have been indispensable to the world economy during the pandemic have been now brought back to the fore.

Responses from seafarers also reveal a worrying trend with reports of companies – namely manning agents – lying to crew, withholding pay, underpaying, and even threatening seafarers – despite longer hours and rising workload for seafarers. Some seafarers reported having to work 11-12 hours daily, compared to 8-9 hours before the COVID-19 pandemic.

In previous Seafarers Happiness Index reports, it was possible to see a rising tide of optimism as crews thought that either the pandemic was receding, or that vaccinations would lift the pall of the crew change crisis. The latest responses showed that if people know when they are going home, there is hope. However, if there is doubt, fear and uncertainty, then everything becomes a problem, and the pressures on board seem to be ramping up.

Andrew Wright, Secretary-General of The Mission to Seafarers said, “As vaccination programmes in many countries have progressed, seafarers have once again been left behind. This quarter’s Seafarer Happiness Index results are not only concerning but they suggest that the situation is going backwards after the progress that had been made in the last quarter. The only sustainable solution is to once again call on governments and the industry to designate seafarers as keyworkers and speed up the vaccination process for crew, which maybe the only hope of getting them home to their loved ones, as well as permitting them shore leave. More importantly, we must continue to listen to seafarers to ensure that their demands are met. After all, these men and women have been instrumental in keeping global trade afloat including the essential supplies and equipment needed to help support effective vaccination programmes. We have leant far too heavily on them in this past year, and they deserve far better.”

John-Kaare, Interim CEO at Wallem Group added, “The crew change crisis is far from over. The entire shipping industry, shipping companies, charterers, unions, international bodies and port states need to come together to ensure that the seafarers are appropriately treated with regards to timely crew changes, priority for COVID-19 vaccination, mental health support, etc. during this crisis.”

Captain Yves Vandenborn, Director of Loss Prevention at the Standard Club, commented, “It is really worrying to see the sharp drop in the Happiness Index this quarter with seafarers raising several major issues at the root of their displeasure. We call upon all key stakeholders to put action to word and take care of our seafarers. After all, without the seafarers, we would not have ships plying the oceans or food on our shelves. Shipowners and managers need to ensure that ships are properly manned and that seafarers’ mental, physical and social wellbeing are provided for. This pandemic is far from over and even with vaccination rates rising worldwide, we are seeing an increase in positive cases on board. This is not the time to be letting our seafarers down!”