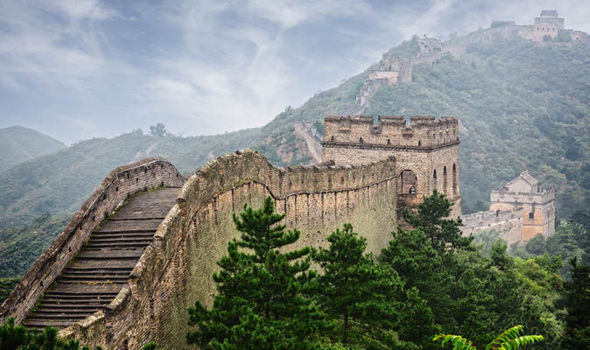 The growing number of cruise lines with ships that have a homeport in China means better cruise terminal facilities and an opportunity for more diverse excursions.

Westerners may never get the full run of the country, but here are five of the best places to visit:

Beijing: Cruise ships call at Tianjin for the three-hour drive to Beijing, formerly known as Peking. Excursions to China's capital include
the Forbidden City of the Imperial Palace and its pavilions, courtyards and gardens. It's the largest imperial palace in China and in a central site, just north of Tiananmen Square.

Now known as the Palace Museum, it is full of ancient treasures as well as fascinating buildings. The number of visitors is limited though, so a pre-booked tour is recommended. You can also walk along part of the Great Wall of China from Beijing, or visit the Summer Palace - renowned for its gardens and statues.

Shanghai: The main port for Shanghai is Wusongkou International Cruise Terminal in the Port of Boashan, about an hour's drive from the city. Although much of Shanghai is now modern and high-rise, there are some older buildings notably near The Bund.

These colonial buildings in the former financial centre stretch for a mile along the Huangpu River. Other tourist spots include the Yu Gardens, with pavilions, pagodas, gorges and ponds, and the Jade Buddha Temple, which has a gem-studded Sitting Buddha.

Hong Kong: The New Territories and Kowloon Peninsula connect Hong Kong Island to mainland China, with the Outlying Islands making up the rest of this Special Administrative Region of China.

Ocean Terminal, on Kowloon, lands passengers right in the heart of Hong Kong's Tsim Sha Tsui shopping district, although there is lots of retail therapy at the terminal itself. In the same district is the Hong Kong Museum of Art, full of Chinese treasures.

For the best views, jump on a Star Ferry to see Hong Kong Island in all its glory - particularly good at sunset - or take the funicular ride to The Peak, the top of Mount Victoria, where you can see over the harbour to the mainland mountains beyond..

Sanya: The cruise terminal on the beach resort island of Hainan is just a 10-minute walk from town with plenty of shops and restaurants. Out of town excursions can take you hiking in the rainforest or to see Nanshan Temple, which has gardens, pagodas and a golden jade statue studded with jewels.

But the save time for the beach: among those recommended are Asian Dragon Bay and Dadonghai Beach.

Yangtze River: River cruise lines such as Viking offer cruises down the Yangtze with two or three days in Shanghai and Beijing at the start and finish of the holiday. Although you won't see other Far East destinations a river cruise package is a great way to see China's highlights.

The cruise down the Yangtze River goes past the famous limestone outcrops of the Three Gorges and most cruises offer day trips to Xian to see the Terracotta Warriors.