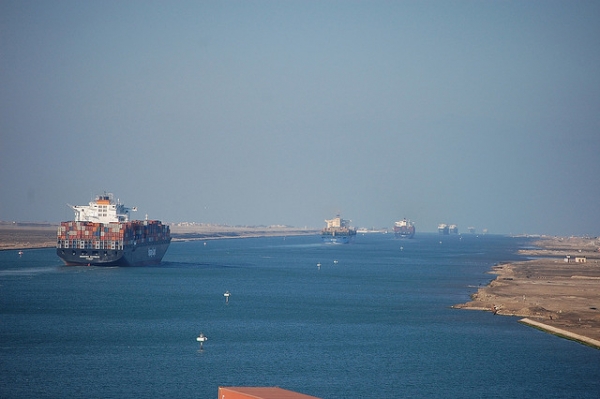 It's one of several major projects announced by President El-Sisi to help boost Egypt's struggling economy.

It's arguably the most strategic strip of water in the world.

The Suez Canal provides a vital lifeline between East and West.

Everything about this project is ambitious.

From the funding, taking eight days to raise almost $9 billion, all sourced from Egyptian citizens.

To the date of completion, one year.

"It would take five years, but we pushed and we made a pressure at the time and it will arrive in three years. But when he told me in one year, I said yes, I will do it and changed all the plan,” Mameesh said.

Since the project's start 10 months ago, 41,000 work around the clock to move half a trillion cubic meters of earth.

The additional 70 kilometers, 43.5 miles, turns the whole Suez Canal into a two-lane highway.

Nearly a tenth of all global maritime trade passes through the Suez Canal. So if you're in Europe and order something like an iPhone from Asia, it'll pass through Egypt first.

Ambitious, with global trade increasing at only around 5 percent annually.

"The $13 billion is slated to come from passage fees and from the increase in number of ships but also efficiency and increase of maritime services presented to passing ships,” Mameesh said.

One potential roadblock to all of this is security.

Militants wage a deadly insurgency next to the canal in northern Sinai.

About two years ago militants fired a rocket propelled grenade at a passing boat in the canal, though no one was killed in the attack.

And bringing the roughly 150-year-old canal into the 21st century.