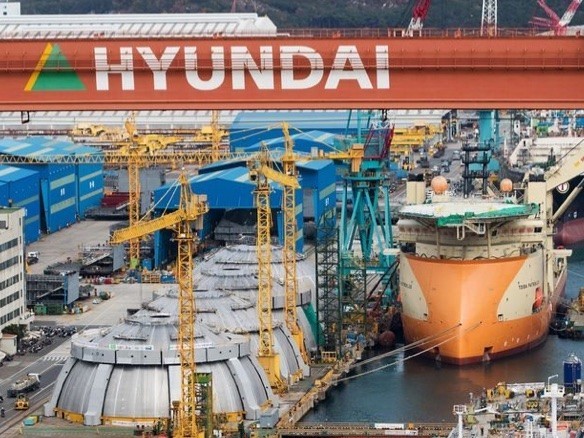 Following China’s approval for the merger of two shipping giants over the weekend, industry watchers said on Oct. 28 it has increased the odds for Hyundai Heavy Industries’ acquisition plan.

China’s state-owned Assets Supervision and Administration Commission gave its green light on Oct. 25 to the merger of two shipping giants -- China State Shipbuilding Corp. and China Shipbuilding Industry Corp. -- creating the world’s largest shipbuilder with combined assets of 800 billion yuan ($113 billion) with sales of $81 billion a year or 21 percent of the global sales.

While the new company, named China Shipbuilding Group, will be able to manufacture a range of ships including high value-added ones in which Korean companies have a competitive advantage, the merger is nonetheless sending a positive signal regarding to the takeover plan of HHI, currently the world’s biggest shipbuilder.

“China gave approval for the combination of its shipbuilders, so it will be difficult for it to reject the merger plan of Korea Shipbuilding and Offshore Engineering and Daewoo Shipbuilding and Marine Engineering,” said an industry source who wished to remain anonymous.

As part of the merger plan, HHI will be divided into KSOE, a subholding company merging parts of the shipbuilder with DSME.

“The approval for the merger of the two Chinese companies is expected to pave the way (for the merger plan of Korean shipbuilders),” Choi Gwang-sik, an analyst at Hi Investment and Securities said. “But it is worth noting that the merged Korean shipbuilder is different in the sense that it will occupy more than 50 percent of the global LNG tankers,” Choi added.

CSSC and CSIC were originally under the same umbrella. In 1999, CSSC spun operations in northern China to establish CSIC as part of restructuring and decentralization.