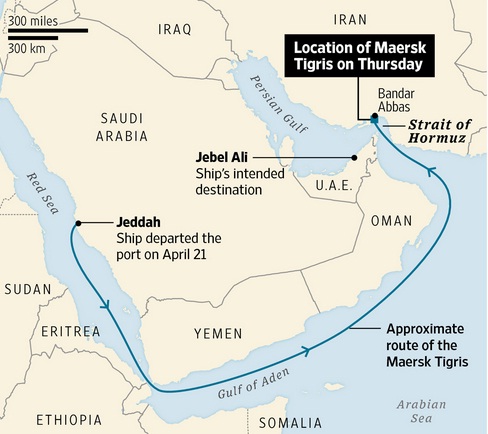 The U.S. Navy has begun accompanying American-flagged ships in the Strait of Hormuz, defense officials said on Thursday, in response to Iran’s seizure of a Marshall Islands-flagged ship this week in the gateway to the Persian Gulf.

Navy warships are providing greater protection for U.S.-flagged vessels moving through the narrow strait where Iranian patrol boats confronted and took control of the M/V Maersk Tigris on Tuesday.

Tensions in the Gulf are bringing further uncertainty to U.S. efforts to forge a nuclear agreement with Iran by a June 30 diplomatic deadline.

While Iran characterized its seizure of the cargo ship as the outgrowth of an unresolved financial dispute, American military officials said they saw it as a provocative show of force by Tehran.

On Thursday, after the Pentagon informed President Barack Obama about the plan, Navy ships started offering stepped-up security for American ships moving in and out of the Persian Gulf, defense officials said.

“Out of an abundance of caution, because of the unpredictability of our Iranian friends, we’re now positioned so that, should the Iranians decide that they’re going to be stupid, we’re ready to respond,” said one U.S. official.

The American decision signals another increase in tensions in the Persian Gulf, where the U.S. military sent an aircraft carrier in April to shadow an Iranian flotilla suspected of carrying arms for Tehran’s militant allies in Yemen. The flotilla eventually turned back, and some Pentagon officials saw the seizure of the Maersk Tigris as a response to that incident.

The White House has said it is keeping the nuclear issues separate from regional security issues, but the unpredictable strategic steps in the strait are testing the U.S. strategy.

Some U.S. and European officials said they believe hard-line elements in Iran, particularly among the elite Revolutionary Guards, are seeking to undermine Iranian President Hasan Rouhani and the talks by challenging American naval forces. They also cite Iran’s detention of a Washington Post reporter as aimed at sabotaging a possible rapprochement between Washington and Tehran.

Critics of the Obama administration’s diplomacy with Iran said the developments were ominous.

House Speaker John Boehner (R., Ohio) on Thursday said the seizure of the Tigris comes in the same week in which an Iranian general blamed Washington for the 9/11 attacks.

“None of this should be taken lightly—or silently, as the administration would apparently have us do,” Mr. Boehner said, adding Congress is moving toward taking an oversight role over the nuclear agreement. “And Iran, by its words and its actions, is showing exactly why we need this type of accountability.”

U.S. military officials cast their Hormuz move as a precautionary step that stopped short of offering escorts or protection for all U.S. ships in the area. For now, one Navy destroyer and three smaller coastal patrol ships will lead the effort for the small number of commercial U.S. ships sailing through the strait.

The tensions are the latest between the U.S. and Iran in the strategically vital passage. In 2012, the two countries built up opposing military forces after Iran threatened to close the passage over rapidly expanding sanctions pressures by the West. In the 1980s, the U.S. Navy provided escorts for Kuwaiti oil tankers during the Iran-Iraq War.

The U.S. Navy also offered escorts and greater protection for commercial ships threatened by pirates around the Horn of Africa nearly a decade ago.

The Navy protection in the strait will only apply to American ships, defense officials said. The Pentagon said this week that the U.S. was bound by treaties to protect the Marshall Islands cargo ship, but said it was trying to resolve that dispute through diplomatic channels.

Some defense officials said the move was a modest precautionary step that was meant to ensure that problems with Iran didn’t get worse.

“It may head off conflict and further tensions,” said a second U.S. defense official. “A healthy U.S. naval presence not only assures commercial shipping, but it deters further harassment that could have that effect.”

Jock O’Connell, an international trade economist, said there are probably fewer than 100 U.S.-flagged commercial vessels, most of which are operated by the global ocean carriers. Much of what is being shipped through the Strait of Hormuz—not a part of normal global trade routes—is likely munitions, equipment, hardware and food for the U.S. military in the region, he added.

The Strait of Hormuz leads to a dead end, which means it is primarily a route for outbound goods to the region or oil shipments out of it. If the situation escalates, it could become a problem for oil prices. Some 30% of the world’s seaborne oil shipments pass through the 21-mile-wide channel.

“If there was any disruption to oil moving out of the Persian Gulf, then you’d have a significant impact on global oil prices in fairly short order,” he said.

Denmark’s Maersk Line on Thursday said a recent Iranian court ruling ordering the shipping giant to pay a private Iranian company $3.6 million to settle a long-running lawsuit appears to have contributed to Iran’s rationale for the seizure of the cargo ship.

The Maersk statement came less than a day after Iranian Foreign Minister Javid Zarif said Tuesday’s detention of the Maersk Tigris and its 24 crew members by Iranian patrol boats was legal and stemmed from a court case in Iran.

Michael Christian Storgaard, a spokesman for Maersk Line, said on Thursday that the company hadn’t received a full explanation from Iran for the seizure of the Tigris, but he said it believed the incident arose from a lawsuit filed against it by an Iranian company in 2005.

After numerous court verdicts and appeals, Maersk Line was ordered in February to pay the company $163,000, a ruling it accepted. It didn’t name the company. But the Iranian firm appealed the ruling, seeking more compensation. Mr. Storgaard said Maersk Line learned on Thursday that it had been ordered by an Iranian appeals court to pay $3.6 million.

Neither Mr. Zarif nor Mr. Storgaard named the private Iranian company that brought the lawsuit against Maersk Line, a unit of the shipping conglomerate A.P. Moller-Maersk Group.

The Maersk Tigris on Thursday was still anchored near the Iranian port of Bandar Abbas, where it was escorted by Iranian patrol boats on Tuesday after they fired warning shots across the bow of the vessel as it traveled through the Strait of Hormuz.

A representative for Rickmers Shipmanagement, which operates the Maersk Tigris, was allowed on Thursday to board the vessel for the first time since its seizure and reported the crew in good condition, the company said. Most crew members are from Eastern Europe and Asia.

Responding to a distress call on Tuesday from the ship, the U.S. sent a Navy destroyer, the USS Farragut, to the area, said Pentagon spokesman Col. Steve Warren.
Maersk Line said the case against it in Iran involved 10 containers of Iranian cargo the shipping company delivered to Dubai in January 2005. The containers weren’t claimed by the consignee and were left to the disposal of authorities in the United Arab Emirates.

The Iranian company put the value of its cargo at $4 million and sued Maersk Line in Iran for that amount. The case was dismissed in 2007, but the company refiled the case in other Iranian courts, Maersk Line said.

Iranian officials have said the seizure of the ship is a commercial and legal matter, yet it coincides with a sharp escalation of tensions in the region.

On March 26, a coalition led by Saudi Arabia began carrying out airstrikes against Iran-backed Houthi rebels in Yemen. The campaign aimed to oust the militants, who took control of Yemen’s government earlier this year, and restore to power the exiled president, Abed Rabbo Mansour Hadi.
In support of the Saudi-led military operation, the U.S. sent an aircraft carrier to the waters off Yemen in mid-April to prevent a convoy of Iranian ships suspected of bringing supplies to the Houthis from reaching Yemeni shores.

Some U.S. officials said the seizure of the Maersk Tigris was Iran’s way of asserting its influence in the Strait of Hormuz following the interdiction of its ships.

On April 24, Iranian vessels also surrounded the U.S.-flagged Maersk Kensington in the area, but sped off without seizing it.