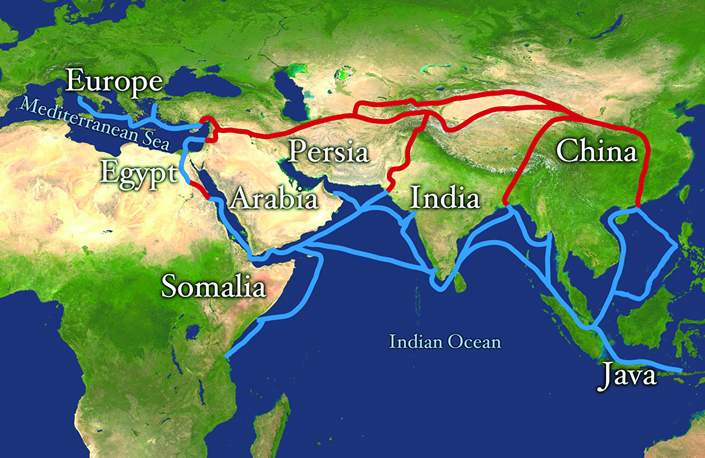 Not content with both purifying the Chinese Communist Party which he heads and with reforming his country, China’s president, Xi Jinping, also wants to reshape the economic and political order in Asia. With the flair that Chinese leaders share for pithy but rather bewildering encapsulations, his vision for the continent is summed up in official jargon as “One Belt, One Road”. As Mr Xi describes it, most recently last month at the Boao Forum, China’s tropical-beach imitation of Davos’s ski slopes, the belt-road concept will “answer the call of our time for regional and global co-operation”. Not everybody is convinced. Some see it as no more than an empty slogan; others as a thinly disguised Chinese plot to supplant America as Asia’s predominant power. Both criticisms seem misplaced. Mr Xi is serious about the idea. And it is less a “plot” than a public manifesto.

Mr Xi first floated the idea in 2013, in Kazakhstan. He mooted a “a Silk Road economic belt” of improved infrastructure along the main strands of what, centuries ago, was the network of overland routes used by silk traders and others to carry merchandise to and from China through Central Asia and Russia to northern Europe and Venice on the Adriatic. In Indonesia, Mr Xi proposed “a 21st-century maritime Silk Road”, reaching Europe by sea from cities on China’s south-eastern seaboard via Vietnam, Indonesia itself, India, Sri Lanka, east Africa and the Suez Canal. At the time, the proposals sounded rather fluffy—the sort of thing travelling leaders often trot out, harking back to a distant past of supposedly harmonious exchanges.

In the past few months, however, the idea has been given a real push. China has gone further toward putting its money where Mr Xi’s mouth is. It has promised $50 billion to its new Asian Infrastructure Investment Bank, which despite American opposition has sparked a race in which 47 countries have applied to join as founding shareholders. China has earmarked a further $40 billion for a “Silk Road fund”, to invest in infrastructure along the land belt and the maritime road. One motive for this splurge is self-interest. Chinese firms hope to win many of the engineering projects—roads, railways, ports and pipelines—that the new “connectivity” will demand. Improved transport links will benefit Chinese exporters. And helping its neighbours’ development will create new markets. That China seems to have realised this has led to comparisons with the Marshall Plan, America’s aid to help western Europe rebuild after the second world war.

China does not like that analogy, since it sees the Marshall Plan as part of America’s containment of the Soviet Union. It insists that its initiatives are for the benefit of all of humanity and are—favourite catchphrase—“win-win”. But it certainly hopes money and investment can win friends. Yan Xuetong, a prominent Chinese international-relations expert, has argued that the country needs to “purchase” friendly relationships with its neighbours.

In Central Asia, battered by low oil prices and plummeting remittances from migrant workers in Russia, the prospect of greater Chinese involvement is welcomed. Russia itself, though wary of China’s steady erosion of its influence in the former Soviet states of the region, is now too dependent on Chinese goodwill to do other than cheer. On the maritime route, however, suspicion of Chinese intentions is rife. Its arrogant behaviour in the South China Sea, where it is engaged in a construction spree to turn disputed rocks into disputed islands, has given the impression that it feels it can simply bully its smaller neighbours.

So the initial reaction in South-East Asia to the belt and road has been sceptical. In Malaysia, where the government’s usual response to a proposal from China is to applaud first and ask questions later, the defence minister, Hishamuddin Hussein, has said the maritime Silk Road has “raised questions” and that it must come across as a joint (that is, regional) initiative, rather than as a solely Chinese one. Indonesia’s president, Joko Widodo, who says he wants to turn his country into a “global maritime fulcrum”, was doubtful at first. But he now seems inclined to help—unsurprisingly since his own plan involves massive investment in ports and other infrastructure to which, he hopes, China will contribute. A visit to China last month yielded a joint statement promising a “maritime partnership” and describing his and Mr Xi’s visions as “complementary”. But Mr Joko had also made clear before arriving in Beijing that Indonesia did not accept China’s territorial claims in South-East Asian waters.

In India, another new leader, Narendra Modi, the prime minister, has his own approach to these issues. He visited Sri Lanka, Mauritius and the Seychelles last month, three Indian Ocean countries to which he promised greater co-operation and spelled out India’s own interests as a maritime power. This was not presented as a riposte to China’s plans. But in January Mr Modi and Barack Obama produced a joint “strategic vision”. Implicitly, India’s response to China’s maritime ambitions has been to reinvigorate ties with small neighbours and to cleave closer to America.

China as number one?
Mr Modi, who will be in China next month, is unlikely to be critical of the maritime Silk Road. Like Mr Joko, he would welcome Chinese investment in infrastructure. But both of them probably have doubts about Mr Xi’s vision of Asia’s future—of a region with China as its hub, with Chinese-led institutions playing an ever bigger role in Asian economies, and with a fast-growing Chinese navy deploying ever more visibly far from China’s shores. Mr Xi, it appears, is guided by a dream of regional hegemony, of countries such as South Korea and Japan drifting of their own will away from America’s strategic orbit and into that of China, the resurgent power reclaiming what it regards as its historical birthright. This is not a plot. It is a long-term—and even credible—plan, albeit one that does little to inspire the rest of Asia.